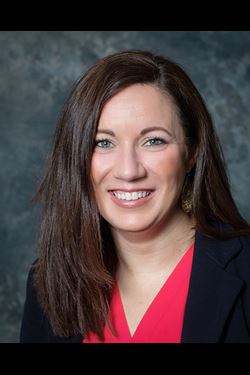 ST. JOSEPH, Mich. – Moody on the Market has named Brittany Grasley, Vice President of Operations at United Federal Credit Union, one of its Top 40 Under 40 for 2019. Radio personality Pat Moody announced Grasley’s designation on MoodyontheMarket.com and 94.9 WSJM and will do so again at an award reception held in early August.

Grasley has worked for United since 2009, beginning as a Member Service Advisor at the Benton Harbor branch. She was quickly promoted, serving as assistant branch manager and branch manager at the St. Joseph branch from 2010-2014. In 2014 and 2015, Grasley was promoted to vice president roles focusing on member experience and sales and service. She was named to her current role as Vice President of Operations in January 2017.

“Brittany has proven success in her leadership skills,” said United’s Chief Operations Officer, Stacy Fillmore. “She is an inspiring and dedicated leader who focuses on developing her staff in order to build effective teams that move the credit union forward.”

“Brittany is a person who gives of her time, talent and resources to improve the lives of people in our community,” said Dana Wales, chair of the Spectrum Health Foundations Lakeland. “She is a thoughtful and strategic leader who is making a difference in Michigan’s Great Southwest.”

In 2018, the foundation raised more than $3 million to support various facilities and programs in southwest Michigan such as the Lakeland Medical Center Pavilion, the Merlin and Carolyn Hanson Hospice Center, Lory’s Place, Caring Circle, and others.